YuppTV brings you the Online live streaming coverage of Australian open tennis 2017 and highlights too. We are glad to be presenting these and many more live events from one of the most prestigious tennis tournaments of the grand slam right here.

Good news for hard core tennis lovers is that they can watch live action from their favorite tennis stars like Andy Murry and Novak Djokovic. Follow Live Scores updates for all matches at the 2017 Australian Open Tennis 2017 Championships in real time.

Australian Open 2017 is going to be full of action as previously injured stars like Rodger Federer, Serena Williams and Rafael Nadal try to make a comeback. In addition, the prize money has been increased to $ 50 million. Singles champions will pocket $3.7 million while double champions and mixed double champions will receive $650,000 and $150,500, respectively. Being the first grand slam this year we offer you the best live streaming experience so you can watch your favorite stars battle it out in Melbourne.

YuppTV provides over the top solutions to people who want to watch TV and more, anywhere and anytime. We have acquired 200+ Live TV channels online in 13 languages during a decade-long journey. Off beat videos from Bazaar, catch up feature up to 7 days, unmatchable movie catalogue, short news on the go have become synonymous with YuppTV. We are multiplying the joy of watching TV by enabling users to watch YuppTV on multiple devices. We consider ourselves privileged to be presenting the Australian Open on our platform.

Turning ideas into reality is not everyone's cup of tea. Expats were missing out on their favorite entertainment, sports and news. An intellectual came up with the idea of providing over the top solutions to their problems. And that's how YuppTV happened. People who work at YuppTV to provide you with entertainment and sports news, are always brimming with energy and are total media addicts themselves. We have acquired 200+ Live TV channels online in 13 languages during a decade-long journey. Off beat videos from Bazaar, catch up feature up to 7 days, unmatchable movie catalogue, short news on the go have become synonymous with YuppTV. After receiving a tremendous response for e- telecasting Australian Open last year, we decided to repeat it this year too for all the tennis lovers out there. Tune in to find out what Australian open has in store for you! 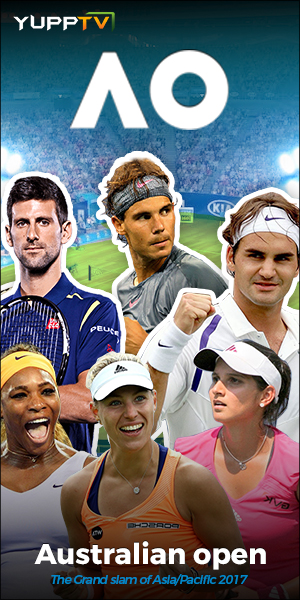